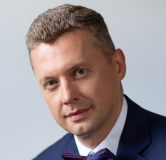 Anton is a graduate of Moscow State Institute of International Relations (MGIMO University) in 2004.
He joined MZS in 2004 and became a firm’s partner in 2010.
Managing partner of MZS since 2019.

Anton is a member of the Moscow Bar.

Anton is named as one of the best lawyers in restructuring and insolvency by the following rating:

Anton leads most of the firm’s insolvency cases. He focuses on complex disputes and unprecedented situations calling for expertise in various practices. Projects managed by Anton are often a combination of a significant number of interrelated proceedings in courts across Russia as well as abroad. Sophisticated legal and procedural strategy in such projects ensures efficient protection of the clients’ interests.

In the past few years Anton has been heavily involved in cases related to bankruptcy, debt recovery and protection under credit agreements, works contracts and lease agreements getting instructions from major banks and investment companies as well as from their clients. Anton also represented major companies in a number of corporate conflicts and successfully protected the clients’ IP rights.